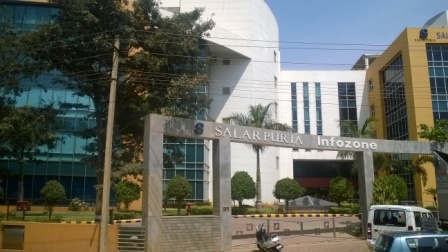 By Dan McGrath (B.P.E.S.S)
Our morning conversation was dominated by issues of food security, the Targeted Public Distribution Scheme (TPDS), poverty lines, basic freedoms and natural law, the merits of cash transfers versus ration books, the ethics of conditionality, and a wide range of other topics each considered from the point of view of Sen’s capabilities approach, feminist theory and neoclassical economic theory. We then moved out in Bangalore City.
Piling into yet another bus we undertook a day tour of Bangalore. Full circumnavigation of the city allowed us to pass through Electronic City. This oasis of modernity and its manicured structure was a stunning contrast to both the rest of Bangalore and, to an even greater extent, the grimier hustle and bustle of Mumbai. Here the garish logos of McDonalds, KFC and Pizza Hut — all displayed in English — dominated the landscape, signaling a patch of ‘development’ neo-colonially transplanted into peri-urban Bangalore.
The status of the many IT estates and campuses are similar to Special Economic Zones (SEZs where regular rules do not apply. Reduced corporate tax rates, loosened labour laws and purpose-built infrastructure are all aimed at incentivising the Foreign Direct Investment (FDI) that cities, states and nations so desperately crave. The question is, at what cost? And the answer is, inequality. Driving along yet another quintessentially Indian flyover, the juxtaposition was stark. To my left were marvels of modern architecture — sharp, angular lines dominated by glass and steel. To my right, formulaic concrete apartment blocks, the paint peeling and windows opaque with grime.
The heavily ‘development’ inspired growth has resulted in the creation of a Western-style middle class within Bangalore, driven and sustained by consumerism where the fruits of growth are poorly distributed, both in socioeconomic and geographic terms. As we spent the evening in a major tourist district, with street-sellers and beggars set against the colourful marketing banners of international brands, the inequities of Bangalore’s IT-led rise were clear.