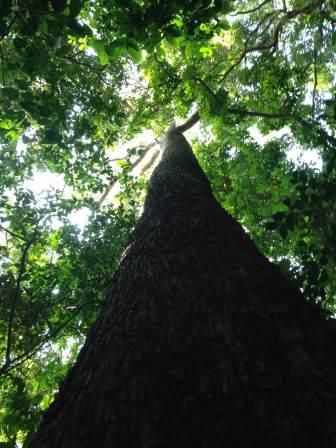 By Kynan Allatt-Churm
Our first morning in Madikeri in the Western Ghats! After a traditional breakfast of ‘idly vada’, as well as eggs and toast, we headed off to the forestry office. This was an invaluable experience as it provided a lot of context to a region we knew very little about. Most rainforest areas are delicate ecosystems that are vulnerable to change. In Madikeri, we were told that negative changes to the Western Ghats would affect the wider Kanataka region, particularly water pollution. The Western Ghats acts a type of water tower to the southern peninsula of India, supplying water to around 250 million people. The vulnerability of this green area has been recognised by global organisations such as UNESCO, which has placed it on the World Heritage List, with 39 Heritage sites inside it. One major reason for this is that the region is home to 325 threatened species.
The Chief Officer of Forestry for the Western Ghats, Mr Manodge, taught us about the balance between conservation and sustainable livelihoods in this region. One main issue he said the region faced was conflict between animals and humans. This was mainly due to animals such as elephants straying onto agriculture lands and either injuring or killing workers, getting electrocuted by boundary fences, or being shot by farmers. Surprisingly, we learned that multi-national corporations who have invested in the region have worked productively with the Forest Department on conservation issues.
After lunch, which included locally produced coffee, we headed to a nearby sacred grove – there are 1,214 of these groves in the Kodagu region. These sacred groves are managed by the tribes that have a spiritual connection to them. Under a decentralised management plan, only the recognised tribal group can enter these forests. Anyone else must get formal permission. Tribal management of the land protects the sacred role of these forests. Unfortunately the law doesn’t deter everyone and poachers are a series problem facing the area – especially in regard to the removal of wildlife and fruits.
It was interesting to compare this decentralised self-governance approach to Australia’s top down approach to nature conservation and indigenous land rights. It made me wonder if such a decentralised form of land management could be used in Australia? The issues here in Madikeri are complex. But it seems to me that a decentralised method of forest management has allowed the region to find a balance between land conservation and sustainable agricultural livelihoods. It is a unique approach, but effective.
As we walked through the sacred grove in the afternoon, our guide pointed to certain trees that he said would fall over in the next 10 years due to disease and then would be removed from the forest. This knowledge that had been passed down through generations seemed to validate this traditional community-based conservation, in that the people who have been entrusted to protect it have the greatest understanding of it.