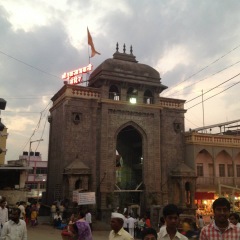 By Rachel Nunn
B. Political Economic and Social Sciences (Political Economy, Anthropology) 2013-2015
Yesterday we said alvida (Goodbye in Hindi) to the TISS Mumbai Campus and caught the overnight train to the TISS Tuljaipur campus. India has a total of 7146 stations as of 2012, travelling along 89, 801 kilometers of tracks. It is a highly popular mode of transport for Indians and I really enjoyed the experience, and slept surprisingly well!
Tiljaipur is a rural town in the Osmanabad district of Maharashtra and is best known for the Tulja Bhavani Temple. The Hindu religion is the dominant religion in India and consists of various spiritual practices, such as yoga, meditation, Ayurveda, vegetarianism and an annual pilgrimage. We were fortunate enough to experience yoga at the TISS Mumbai campus – I found the breathing exercises and meditation to be very beneficial after a day of study!
The Tulja Bhavani Temple was built in the 12th Century CE and was named after the Hindu Goddess Bhavani. Two more temples in her honour have since been built in Chittorgarh and Gujarat. Puja, the Hindu Prayer ritual, is performed daily at the temple and each day hundreds of locals come to honour the Goddess.
I felt so privileged to be a part of this spiritual practice. As we entered we removed our shoes and bathed our feet and hands. We then queued up amongst local men, women and children to view the Holy Throne of the Goddess. Following this we had Holi placed on our faces at two separate points, before we departed the temple. It was evident how much the ritual meant to those around us – I felt as though we were a part of something very sacred.
Religion in India is heavily intertwined with the caste and class systems. Due to the complexity of India’s religions, the state is considered pluralistic – all religions can be practiced as and how they want to, and the state will manage their coexistence. The state is expected to maintain equality amongst all religions. The Constitution of India declares the nation to be secular. In our first week in India we have met people of a multitude of faiths – Buddhism, Sikhism, Islam, Christianity and of course Hinduism.
This evening at the TISS Campus a concert was held as part of the Ambedkar Lecture Series TISS is running. Vineet, a student at TISS, translated a lot of the concert for me, and told me the students were cheering because Ambedkar was a Dalit (considered the lowest caste in Indian society) and yet managed to escape the low expectations of his caste and change the economic pathway of India. The students admired Ambedkar’s power over the caste system, and Vineet informed me that although caste was still pervasive, many of the Indian youth wanted to move away from it and towards a more equal society.
Caste and class conflict are still rampant in India, particularly in the rural areas, and it is landless members of the Dalit caste that suffer most from privatisation and environmental degradation. Yet as I sit here in the middle of Tiljaipur, I am surrounded by progressive students who want people of all castes and classes to be able to unite as Indians – not as Dalit’s or Brahmin’s or Hindu’s or Buddhists, but simply as members of modern India. It is an inspiring thought and one which I’m very grateful for.