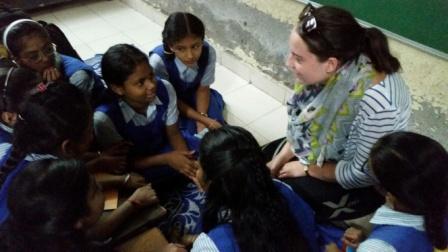 By Angela Pursey
A staggering 40% of the population of Mumbai live in slums. This is equivalent to half the population of Australia. The biggest slum in India, in fact in the world, is Dharavi. This infamous informal settlement, sometimes called “The Heart of Mumbai” for its shape, location and place in the economy, has a population of more than 700,000 people, and a density of 400,000 per square km. This was where we went today.
Dharavi is a labyrinth of narrow alleys bustling with industry, life, and colour. We walked through dim alleys as narrow as super market isles, doors open on either side to workshops where men sat at sewing machines, or worked as leather tanners. Stagnant ditches of toxic sludge sat beside the buildings, each alley tinted to the colour of its trade – blue for the denim, black for leather, orange for pottery, and red or green or purple where dying was done. By there was also brightness. In adjacent streets, away from the manufacturing, women went about their daily lives in beautiful scarves and saris every colour of the rainbow.
I think we all felt a little uncomfortable, unsure on whether we should enter this area of the city, if we had a right to demand to be shown around the neighbourhoods of people less fortunate than ourselves, and whether we were welcome, or over-stepping some kind of ethical line. As we walked through the settlement the streets were full of children running about and playing, they waved and smiled at us and said hello, which made us feel a bit more comfortable. Factory workers waved and smiled at us too – whether because we were genuinely welcome or because a big group of westerners was a novel distraction from their labour I am still unsure.
I was surprised at the number of schools we passed on our walking tour, and especially the number of children walking around in school uniform. We visited the Sri Sri Ravishankar Vidya Mandir school – a modest looking single story establishment of two buildings, connected by a high canopy of blue tarpaulin and bamboo poles, with a bright mural of Disney’s Aladin, Genie and Jasmin on the walls. In small groups we were invited to go to different classrooms and chat with the students, who were all proudly wearing their immaculate blue uniforms. I was a little shocked by the confidence of the students. As soon as I sat down on the mat with them a group of boys and girls flocked to talk to me and ask me questions: “where are you from?”, “Do you like India?”, “What are your hobbies?” When they told me about their own lives their enthusiasm for school was foremost. The students are mostly first generation school goers who live in Dharavi. Last year 20 students went on to junior college – a fantastic achievement for children coming from such a disadvantaged background.
Three main things about the workings of the school stood out to me. The first was the focus on English. A poster on the outside wall said “I will speak English at all times” and another said “I may not know all of the words, but I will try my best in English”. India has two official languages, Hindi and English, and thousands of other regional languages and dialects are spoken too. This school emphasises fluency in English as a pathway for success and opportunities in the work force. For many of the students at the school English was not their first language but I found them easy to converse with. Their multilingual ability was impressive, and I felt a bit ashamed that I could only speak one language.
The second stand out was the inclusion of meditation in the daily schedule. Each morning before classes begin, both teachers and students would take part in a meditation ritual, to calm their minds and prepare for the day of learning.
The third was the focus on goals. Inside the classrooms were posters of achievements the class had decided were their aims for the year: reading 40 books, grade B2 and above in all subjects. This seems like a great way to give the children something to strive towards, and aspirations soared.
Through corporate partnerships and donations the school is very well equipped, with many books, projectors and a SMART Board. One of the boys told me “I love coming to school because we have everything here – milk, food, love. Our class is like one big loving family.”
Perhaps not all of the schools in Dharavi are equal, but the hub of smiles and energy that is Sri Sri Ravishankar Vidya Mandir is a truly inspirational place, giving opportunity and support to so many children who are in disadvantaged circumstances.