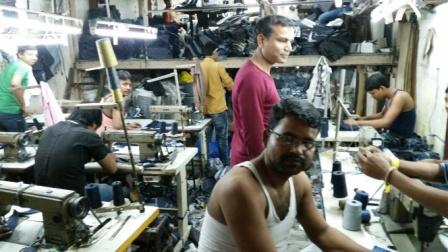 By Sarah Larsson
Set aside all preconceptions of what a ‘slum’ is. Dharavi is a labyrinth of organised chaos, a thriving community of productive and diverse people. Order in Dharavi, and Indian society in general, is hierarchical. The overarching caste system is constructed and reproduced through ethnic, religious, gender, linguistic and class divides. Hostility and conflict are often byproducts of such complex identity politics. Dharavi ‘slum-dwellers’ are therefore not a homogenous mass. They are mix of distinct groups that manage to survive in the closest of conditions. They are savvy, social and strong.
The day began with a visit to a school. The school was endowed with decent teaching facilities, qualified teachers and an enlightened education philosophy: “to convert information into knowledge into wisdom”. As we travelled deeper into Dharavi, we came across an area dense with industrial activity. Leather, pottery and textiles workshops were tucked within open-sewer laneways. The area had an overwhelming stench of carcinogenic leather treating chemicals. Here, I witnessed the very bottom of international and domestic supply chains that provide a growing global middle class with cheap consumer goods. Handbags, jeans, belts, sari’s and dresses emerged as final products before our eyes. The industrial area was packed full of informal workers, despite its ramshackle infrastructure and non-existent safety regulation. I observed one recycling workshop that turned plastic water bottles into soft-toy stuffing. A loud machine churned out the bottles into a blizzard of fine plastic particles. For the mask-less man bagging the stuffing, long-term respiratory disease seems inevitable. As an informal labourer at the bottom of the social ladder however, no compensation or protection is available. Outside the workshop, I continued to dodge transport workers who carried back-breaking amounts of materials from one place to the next.
After passing through a dense maze of private homes – none of which appeared particularly private – we entered into Dharavi’s commercial district. This was exhilarating, fast paced, vibrant and various. Streets were lined with food stalls, clothing retailers, Hindu shrines, Christian churches and Islamic mosques. In front of these conglomerate structures sat female vendors behind small piles of vegetables that lay on tarpaulin. The gender divide was stark.
Throughout the day it became more apparent that physical space in Dharavi is organised in such a way that allows its diverse peoples to coexist in a functional and orderly way. Over generations, Dharavi has adapted to suit industrial and social changes – much like any other society. However, because Dharavi ‘slum dwellers’ have no land tenure rights and are technically illegal inhabitants, the space essentially functions outside the law. For this reason, order is organic, fluid, unspoken and often symbolic. The marginalised Muslim population form tight communities. Family homes in wealthier areas are situated away from large open sewers and rubbish heaps and enjoy the luxury of front doors. For the most part, people are happy and energetic because in Dharavi, they can derive a sense of belonging around a network of friends and family.
In recent years, Dharavi has received attention as a major hot spot for redevelopment. It is conveniently nestled between two major train stations and sits in close proximity to rising financial and business districts. One development proposal suggests resettling the one million residents onto 43% of the existing land and commercially developing the other 57%. Without any property rights, this mass of people have no formal power or agency to stop this from going ahead. Yet after seeing how Dharavi functions today, the political, social and economic implications of uprooting such a productive and culturally rich community would be immense. The destruction of Dharavi will not only disrupt the livelihoods of its residents, it will fundamentally undermine the development of Mumbai as an emerging ‘global city’. Who will provide necessary services for the surrounding elite? Who will recycle 80% of the cities rubbish? Dislocating Dharavi will also have significant implications for global production and consumption patterns.
Today, I began to understand that Dharavi is a place of contradictions. It is chaotic, but ordered; internally divided, yet filled with community spirit; a semi-permanent settlement that appears immoveable; a place of refuge and for those society has rejected, but without whom society would fall to pieces.