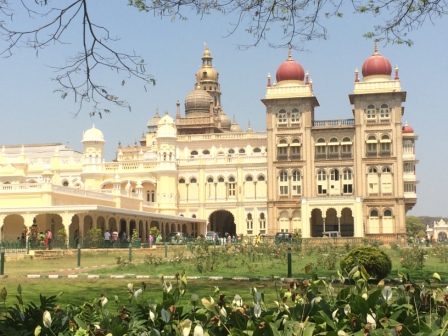 Today we made the long journey from the amazing Madikeri to bustling Bengaluru. After nine hours of travel, we were warmly welcomed to the Institute for Social and Economic Change (ISEC), Bangalore. It is an All India Institute for Interdisciplinary Research and Training in the Social Sciences, established in 1972. Together with the University of Sydney, ISEC is hosting an International Seminar on Climate Change and Food Security, which we will participate in tomorrow.
To break up the long trip we stopped half way in Mysore and visited the Mysore Palace. Mysore Palace is among the grandest of India’s royal buildings and the second most popular tourist destination after the Taj Mahal. It was home to the Wodeyar family that ruled the Kingdom of Mysore from 1399 to 1947. The Wodeyars were the only Indian Royal family to have ruled a kingdom for more than 500 years. The Palace is symbolic of the present and the past – the government and hierarchy of the pre-colonial period and the strong influence of British culture that remains a defining feature of present day India.
The Kingdom of Mysore in southern India was founded in 1399. The vast majority of the people lived in villages and agriculture was their main occupation. Towards the end of the 18th century, there was a series of wars fought between the Kingdom of Mysore and the British East India Company. The agricultural economy changed under the British, when tax payments had to be made in cash and were used for the maintenance of the army, police and other civil and public establishments. A portion of this tax was also sent to England. England and the Maharaja of Mysore came to an agreement and implemented the British rule in Mysore. The influence of the British is obvious throughout India and particularly in Mysore.
English architect Henry Irwin built the palace in 1912, after the previous palace was destroyed in a fire in 1897. The Palace includes English, Hindu, Muslims and Indian architectural motifs. Over the past two and a half weeks we have all noticed the British influence still present in India. Tea is always served to us more than once a day; we have witnessed many cricket games on the side of the road as well as cricket always being a topic of conversation with us Australians. In Mumbai, we visited the Gateway of India, which was built to commemorate the visit of King George and Queen Mary in 1911. The architecture of the gateway and the surrounding buildings and hotels are all of gothic style. Many of the students we have spoken to have a desire to study in Britain, as they believe a degree from an international university is worth more.
It was very interesting for us to visit the Mysore Palace as it was a complete contrast to other places we have visited on the field school, in particular in Dharavi, the slum in Mumbai. The palace was so extravagant and underscored the income divide in India where the wealthy are extremely wealthy and the poor are awfully poor. But there is a growing middle class that is increasingly educated and globalised. The growing IT sector in Bengaluru is home to an emergent middle class and presents a stark contrast to the poverty and agricultural dependent societies we have seen elsewhere in India.