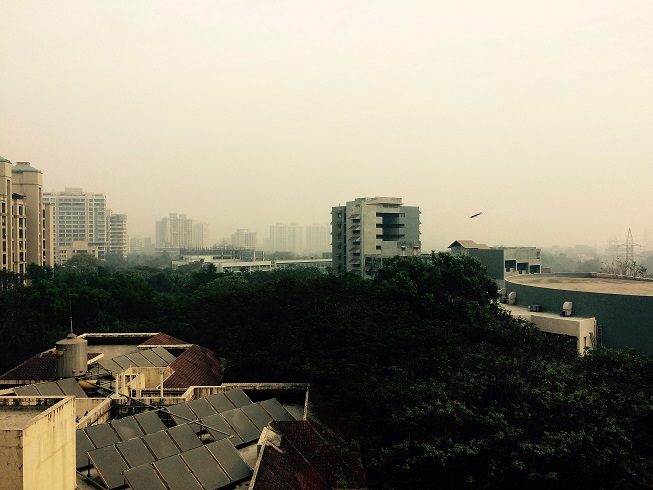 If you ever find yourself waking up on the seventh floor of the Tata Institute in Mumbai, this is what you should expect to see. Today’s weather forecast, ‘hazy’. Tomorrow’s — ‘cloudy’. After that, ‘smoky’. You get the picture.
Down on the ground, the situation is no better. Traffic controllers arm themselves with black face masks. Congested roads fade into a hazy mist. As Mumbai’s smog levels creep higher and higher, the question of how to reduce dirty emissions from vehicles is becoming increasingly difficult to ignore, for citizens and government alike.
Earlier this week, the Maharashtra government revealed its plans to address the issue of pollution — through a comprehensive electric vehicle plan. The Cabinet has cleared a new policy that encourages the manufacture and use of green vehicles through tax rebates for electric car buyers, financial incentives for manufacturing companies, and subsidies for new charging stations. Owners of electric vehicles will be exempt from road tax and registration fees, and offered a subsidy of up to 100,000 rupees. The government claims that the new policy will create 100,000 new jobs within the state. For greenies and climate activists alike, this sounds like a dream come true, right?
There is no doubt that electric cars are a useful strategy for reducing vehicular emissions. If every car and bike in India were replaced with an electrical equivalent, the transformation would be unprecedented. Smog could be a thing of the past. In India’s goal to go completely electric by 2030, it’s a bold step.
But I can’t help but wonder — of all the bold government steps that India is in need of it, is this the right one? Electric vehicles look good on paper. But looking out this window, it’s hard to agree this policy is adequate. At best, it’s a signal of the government’s decision to prioritise environmental action. At worst, it’s yet another example of government policy that perpetuates inequality in India. What sense does it makes to subsidise electric cars, if the roads they’re driving on are riddled with pot holes and lined with slums? Why should 100,000 people get cheap Teslas when millions of others are still vying for plumbing?
Last week, I would have jumped at any proposal designed to promote electric cars. They’re clean, they’re efficient, (most importantly) they look cool. But after a few days of walking the streets of Mumbai, I’m struggling to summon any enthusiasm for a policy that seems to disregard the needs of so many millions of Indian citizens, to whom electric cars are a distant dream. There is no question that improving air quality and reducing emissions should be a government priority. But the introduction of electric vehicles won’t stop the huge amount of biomass burnt by slum-dwellers, nor will it reduce the enormous emissions from India’s coal and oil power plants. Electric cars are a fantastic tool for clean energy — provided they come hand in hand with energy policy that meets the needs of Indian society beyond the richest 10%.
Reading about India’s environmental policy back home, I never considered it in relation to the growing divide between India’s have and have-nots. But being here now, it’s clear that any steps taken by the Indian government to address pollution must be taken as part of a larger mission — to reduce India’s crippling inequality. At its heart, getting rid of smog isn’t about reducing carbon footprints, meeting climate action goals or creating a cleaner planet. It’s about improving quality of life for the citizens of India. Looking out at the streets of Mumbai, it’s pretty clear that the citizens of this country are in need of a lot more than a few cheap Teslas. Electric vehicles will undoubtedly play a significant role in reducing vehicular emissions sometime in the future. But right now, let’s not forget whose future we are talking about when we speak of a clean future for all of India.