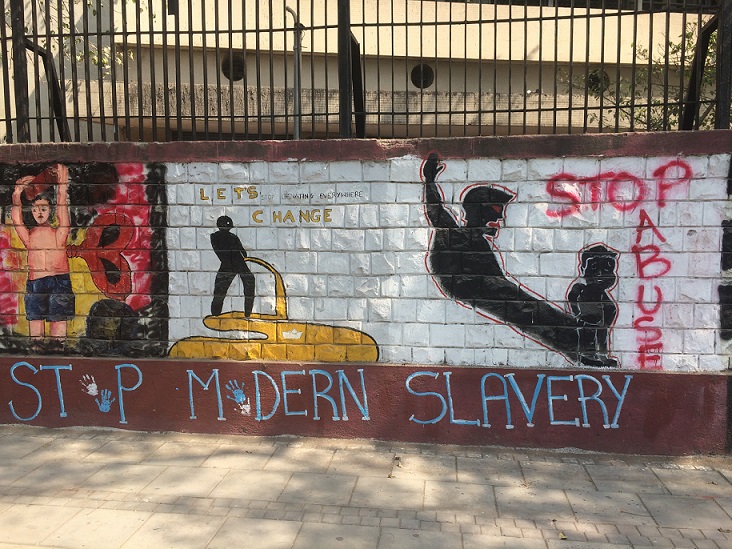 Two things have surprised me during my time in India: men urinating in public, and the lack of women in public spaces. Travelling around, I have found myself in places where groups of two or more men are out with their friends. But until I got within a day’s drive of Mumbai I had not seen groups of women out with their friends. When I first came across a group of women out together, it wasn’t a group of two or seven, but a group of over twenty… safety in numbers, I suppose.
However moving in such a large group is not always practical, which brings me back the issue of open defecation. In class we have been learning about many aspects of Indian society, particularly the complex interactions of caste, class and gender and how they shape people’s individual agency. I have been particularly struck by how open defecation is a common practice in many parts of India. This means that women often wait until nightfall to relieve themselves. Under the cover of darkness they walk out of their villages and into the fields. But this can be a very dangerous activity. Cases of rape are common.
In some areas, public awareness about the health impact of open defecation is on the rise. One group of women have begun a movement whereby they refuse to marry a man unless there is a toilet installed at his house! Sounds like a great idea. I can’t help wondering, however, whether this is a bargain that most women are able to make. India, as we have been learning, is a deeply stratified society and women are rarely able to make such claims against prospective bridegrooms. When dowry deaths number in the thousands each year, it is hard to imagine that women are in a position to negotiate sanitation facilities.
When I arrived in Mumbai from my Northern travels, I was suddenly in a different world. It was a strange combination of the India I had seen so far, mixed with British colonial buildings and women walking around freely. In some ways, I felt like I could almost be back in Sydney. It is the smells that set Mumbai apart. For a stretch of half a block, you may be smelling spices, flowers and fruit. But in a moment, you find yourself suddenly inhaling the smells of urine, defecation, and rot.
In India, a city can feel foreign compared to the surrounding rural areas. While some women in the city eat at fine dining restaurants, others are risking their lives as they walk to a field late at night. On this peaceful evening, gazing out of my seventh story window as the sun sets over the slums, greenery and multi-story buildings nearby, I can’t help but wonder how the women of Mumbai city are living. I wonder how their different backgrounds have converged to bring them here, and how the city will treat their daughters.