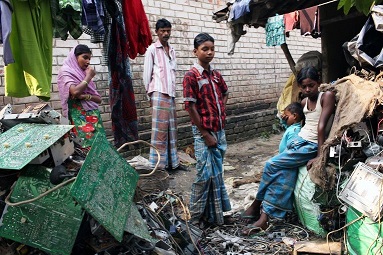 India’s mining industry is growing. New jobs, unskilled workers employed and untapped resources discovered. But it isn’t the substance of mining you would expect. I’m talking about urban mining. That is, the process of reclaiming materials from spent products, buildings and waste generated in the urban environment. It’s recycling the precious metals permeated in urban waste. Sounds appealing so far – a salvation for all that waste we guiltily expend. In fact its not just any waste, its that deleterious waste, in which we know little of its end – electronic waste.
Urban mining is a lucrative business as it is estimated 55 billion euros worth of raw materials lie in unused electronics worldwide. Up to 60 elements from the periodic table can be found in them including highly demanded minerals the world is currently running short on such as gold, copper, nickel and iron.
In 2016 the global quantity of e-waste was around 44.7 million metric tonnes (Mt) or 6.1 kg per inhabitant – equivalent to 4,500 Eiffel towers and by 2021 it is expected to grow the 55.5 Mt. It is hardly surprising considering India’s mass population and fast growing electronics industry that it has become the worlds 2nd largest consumer of phones and hence the worlds 4th largest e-waste polluter.
There are now over 1 million people in India employed in informal operations in the manual recycling process of e-waste and they are all eager for a share in the potential profit. While urban mining provides income earning opportunities for some of India’s poor, the process is highly problematic. Firsty, unscientific treatment (without any safety measures or even understanding the toxic materials) of e-waste such as burning, recycling and chemical digestion has calamitous effects on human health. Everyday workers deal with perilous toxic chemicals present in electronic products that have been found to cause serious and irreversible long term and short term damage, such as intergenerational brain damage, cancer, respiratory and skin disorders, immune system damage and muscle weakness – to only name a few. Secondly, as most of the electronic matter fails to decompose, there is significant air, water and soil pollution emitted, which in turn incurs negative health consequences to the broader community as well as the biodiversity.
It’s a grim picture of an unfortunate consequence of uneven development and absent regulation but it’s not to say that we should all give up our treasured technology because of its disastrous effects. A push has been made by way of producing electronic equipment with minimum toxicants, which some NGOs such as Toxics Link, have began activity pursuing. Since a 2003 European Union incentive to restrict the use of hazardous parts, the composition has become less deadly, albeit still harmful. More momentous is the international movement towards recycling e-waste with zero landfill under scientifically proven safe methodology. For most of the developed world, zero landfill is a reality but for India it remains a distant dream. Nonetheless, over recent years, Indian academics, scientists and NGO’s have been pressing the government to implement a zero landfill program to save lives. In response, the central waste management act has been amended and provisions such as the Extended Producer Responsibility has been mandated, yet policy is much inadequate and enforcement remains very limited.
In any case, awareness and pressuring the government for change seems to be the best viable action. Only under a proactive government that takes responsibility for the security of its people, will India be able to grow sustainability and inclusively. It’s not that poor workers wish to inhale toxic chemicals as a form of employment but rather there is no better option.