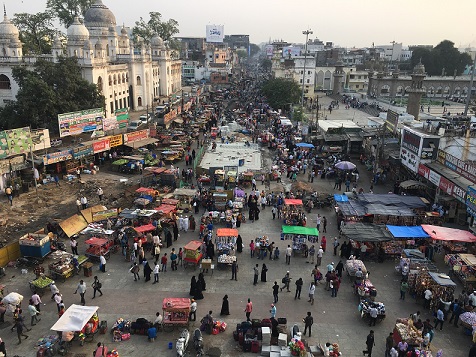 Among the many staggering facts, statistics and stories we have heard throughout our three weeks in India, one theme sticks out to me:‘Informalisation’ in the Indian economy. This continues to intrigue me with 92 per cent of the Indian workforce employed in the ‘informal’ sector. What does this mean? Well, strictly speaking, it means that the 92 per cent of Indian workers do not have a formal employment contract nor the legally enforceable benefits, securities and workplace protections that come with them. We could have learned this statistic from the confines of a lecture room back in Sydney, but one of the advantages of coming on a field school is getting a first-hand sense of how ‘informality’ manifests in the workplace as well as in the broader society.
To survive as a labourer in the Indian economy, you have to be flexible, nimble and hard-working. The streets of Mumbai or Hyderabad are buzzing with all sorts of sights and sounds, from the putt-putting of auto-rickshaws driven by self-employed auto-wallahs jostling to secure a ride, to street vendors and hawkers pushing food carts, and even hand-craftspeople, plying trades such as basket-weaving by the side of the road. From the open balcony of our seminar hall at the Tata Institute of Social Sciences in Mumbai, I see un-harnessed construction workers straddling the bamboo skeleton scaffolding of a mid-rise build site in the distance. I imagine they are seasonal migrants from the country, similar to the ones I have read about, who gather on street intersections each morning in search of casual day labour for several months of the year, driven to work informally and in unsafe conditions by a mix of desperation and opportunism. I can only wonder about other migrant labourers who I have read about but are completely hidden from view, such as the growing army of informally employed domestic workers – mostly women maids – servicing the homes of the Indian middle class.
Another thing you need to survive as a labourer in the Indian economy, so I’ve learnt, are social connections. Mediators and middlemen facilitate the movement of labour across the country, mostly from the countryside to the city. More generally, informal social linkages are essential in an economy where relations of trust, reciprocation and honour are more important for securing work than formal qualifications. My suspicion is that these social linkages help to explain the overwhelming dominance of ‘informalisation’ in the Indian labour market: promises and social sanctions act as substitutes for the legal protections associated with formal employment.
This is far from something to be optimistic about, however, if one appreciates how social and hence labour relations in India are infused by the caste system. Although it is illegal for employers to discriminate based on caste, the idea that certain jobs should be reserved for particular hereditarily defined social groups – or castes – still pervades the Indian milieu and effectively stymies social mobility. In this context, the social and informal networks that underwrite the informal economy are not some politically-neutral mechanism through which the labour market operates. On the contrary, they entrench the existing economic and social inequalities that are so palpable whenever one travels through a major Indian city. They are a mechanism through which the politics of caste are reinforced and reproduced.
So is formalism the way to go? Well, yes – all workers deserve decent working conditions, and state regulation of labour standards could be a way of enforcing anti-discrimination laws that already exist on paper. But the mind boggles at how such a dynamic, fast-paced and truly enormous labour market could be brought under the effective regulation of the state. Furthermore, understanding how entwined the labour market is with caste and informal social networks allows one to appreciate the enormity of the challenge: a fully fair and meritocratic labour market requires more than top-down policy. It requires a wholesale shift in the nature and structure of social relations – unfortunately something not likely to happen in the near future.