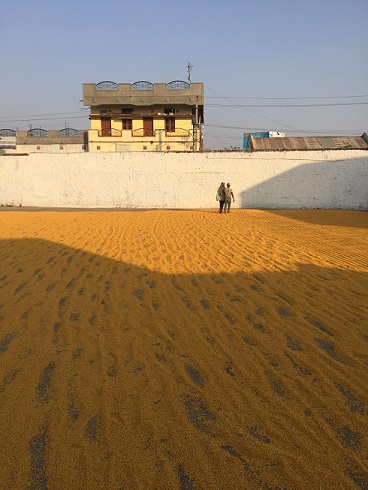 Everywhere we’ve gone in India, at every meal, there’s been dhal.
Demand for dhal in Karnataka and surrounding states is so high that in Gulbarga alone there are 325 dhal factories who all turn around approximately 100 tons of dhal a day. It was pretty fitting that we visited a factory which processes raw lentils, or dhal, into the core ingredient of the staple dish we’ve been enjoying. The factory turned a high profit and we discussed with the owner how business was usually pretty good; everyone always wants more dhal.
When we arrived at the factory we were greeted by a sea of yellow; the concrete of the large front courtyard was covered in dhal drying out and splitting in the sun. Later we saw men walking barefoot across the lentils in tandem, turning them to ensure even drying.
The workers at the factory were all migrants from Bangladesh or Nepal, or other states in India. These are season workers who often return home during the monsoon season when dahl production is halved. The workers live 20m from where they work and got the job often through family or community ties. Even though we were offered face masks to protect our lungs from the fine dust of production, none of the workers had anything more than a cloth they tied around their noses. They worked close to heavy industrial machinery in sandals and could collect 100 rupees/month for 2 months if they injured themselves while working.
The workers were mixed, men and women, and everyone worked 10 hours days. We were informed, however, that men were paid 400 rupees/day (equivalent of .80AUD/hour) and the women 300 rupees/day (.60AUD/hour). The women didn’t do the heavy work which explained the pay discrepancy but this stratification, spoken as if it were natural by the factory owner, was a clear manifestation of the deep gender divisions which run through most of Indian society.
The factory owner was an educated Indian businessman who spoke fluent English. He was from Rajasthan, although born in Karnataka where his family had been processing dhal since 1902. Heritage, culture and language are so tied to locality within India that this man had only ever been to Rajasthan twice but still identified strongly as being Rajasthani and spoke a language from his home state with his children. He had grown up on the factory floor, identifying the different grades of dhal and helping the workers to turn the lentils with his bare feet until he was old enough to take over the business.
Funny to see the lives and livelihoods and bare feet behind the food we’d been happily tucking into for the last three weeks.