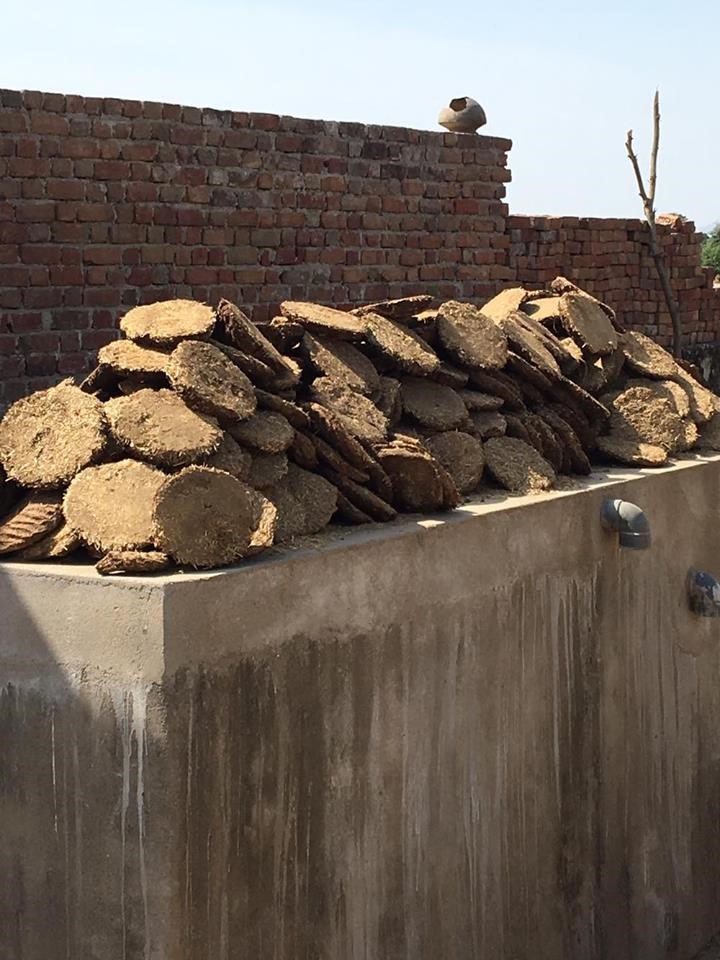 While driving to a rural village in the state of Rajasthan I pulled my curtain across to take in the surroundings. The landscape was dry, scattered with plots of green. The roadside supported a number of small shops, crowded with small groups of men gathered, drinking chai. The view from the bus was a fascinating glimpse at rural life in India, but there was one scene in particular that continued to grab my attention. And that was the piles and piles of round brown discs – cow dung patties.
Their Indian name (as I later learnt) is “goitha” and they are used by millions of people across India as a source of fuel for cooking. Women in rural villages are in charge of collecting faeces from bovine species, mixing it with hay, moulding into discs and laying them out to dry. Once dry they are ready to fuel stoves and fires all year round.
Once we arrived in the rural village and spoke with the local women’s group we learned that almost every single household had an LPG connection in their home. But most still preferred to cook with wood or cow dung because it makes the food taste better. Yeah, so apparently cow dung makes food taste great, so much so that there is now an online market for dung patties from city dwellers wanting a taste and smell of their rural childhood!
At first glance the use of cow dung as a source of fuel seems greatly sustainable not to mention affordable. The problem is the negative affect of these more traditional sources of fuel on household health.
Indoor pollution is recorded to be responsible for around a million deaths every year in India. Burning solid fuels- such as cow dung creates smoke particles that are damaging to human health. And since almost all cooking happens in the house, every day millions of Indians are exposed to harmful pollutants in the quest for sustenance. In fact, up to half of premature deaths among children can be linked to the inhalation of particle matter.
The Indian government is responding to the issue undertaking a large roll out of LPG to rural households and subsidising the cost of gas. So why do so many Indian families still opt for traditional forms of fuel?
Of course the answer is not simple, and can definitely be equated to the cost associated with LPG. But as one scholar at the TISS/USyd workshop on ‘Well-being and Social Welfare in 21st Century India’ argued, education is a key factor preventing rural communities from using their LPG connections. The government is not investing in the knowledge dissemination that would inform rural communities of the health benefits of switching to other fuel sources. This highlighted the importance of government led initiatives such as LPG provisions to include educational programs to ensure proper implementation and better health outcomes.