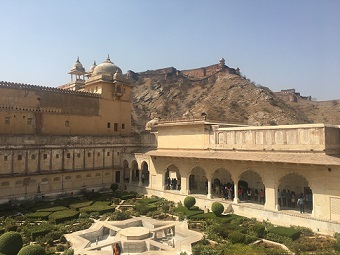 Echoes of the British Empire can be seen in many different ways within India. From television shows to restaurant chains to the education system. However, if these remnants make you think India’s culture and history have been repressed or erased, you would be mistaken.
During this field school we had the incredible opportunity to visit the Amber Fort and see firsthand the rich history and culture that India has to offer. The fort stands in grandiose style over a hilltop and is a feast for anyone who values a trip to the past. This rambling Amber Palace offers a curious blend of Muslim and Hindu architectural design. This is due to political alliances between the Rajput rulers and the Mughals, two different clans, during the medieval era. An exhibition of the yester years, this site is a testament to the ingenuity of the artisans of ancient time.
This tour taught us that Man Singh, the commander of Emperor Akbar, started the fort in 1592 and from the 16th century up to the foundation of Jaipur in 1727 the Amber Fort was used by the Rajput’s as a place of residence as well as defence purposes. The Rajput’s were Hindu rulers who had excellent knowledge of ancient building methods. They build the fort in a defensive architectural style by utilizing the natural features of the site. Not only was this fort used for defensive purposes but is also displayed the honor and wealth of the Maharajas. As we walked past the mighty walls and picturesque gardens we were transported to a time of royalty, grandeur and splendour. Marble and stone line every corner; elaborate paintings and stonemason’s work cover the walls.
Walking through this fort I began to think about the importance of conservation of such significant cultural and historical sites. A tour guide walking ahead of us said something that stood out to me. He said ‘The identity of India is linked with our past.’ Sites like the Amber Fort represent a part of Indian cultural identity that means more than a pretty place for tourists to visit. During the British rule, no major construction work was done in the Amber Fort and their colonization marked the beginning of tourism for many European travellers. The amount of tourists led to a significant amount of stress for the site and for a long time the Amber Fort faced neglect. 2005 saw the first conservation initiative and in 2008 it was added to the World Monument Watch List.
This remarkable place is just one of the many examples of Indian history and culture. Walking through India and seeing its architecture and design, it is clear that while this country may have retained certain aspects of British influence, the richness of its culture is prevalent everywhere you look. The cobbled paths and marble sandstone of the Amber Fort and its rich history reflect the heart of Indian art and traditions. It’s values and cultural rituals are followed even to this day and this palace is a proud and elegant site to commemorate Indian’s fascinating past.