By Siobhan Herbert
Bachelor of Economics and Arts, majoring in Economics, Political Economy and Government and International Relations. 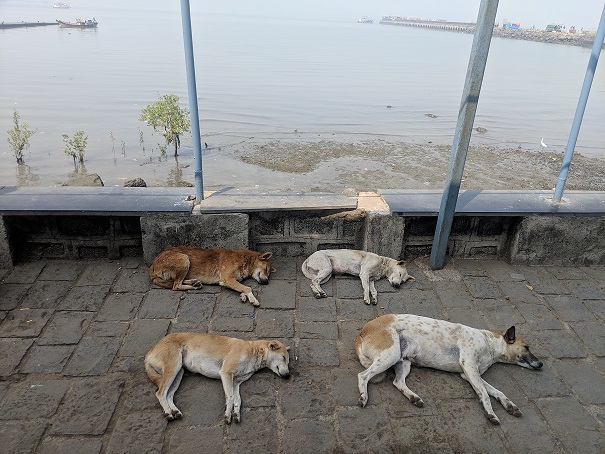 It’s well known that India’s stray dog population presents a unique set of challenges for the developing nation. As an avid dog owner, I knew seeing conditions of these dogs would come as a shock. However, their distribution is also representative of broader patterns of development and the need for better governance in India.
Before leaving for the field trip to India, my friends and family joked about having to resist patting the dogs that roam Indian streets, for a fear they may carry rabies or other diseases. With 35 million stray dogs in India, it is no surprise that rabies is so prevalent. The World Health Organization reports India faces around 18,000 to 20,000 cases of rabies every year. These numbers show no sign of decline, sparking debate and calls for the Indian government to implement policies to control the stray dog populations.
Upon arrival at the Tata Institute of Social Sciences (TISS) Campus in Mumbai, we were welcomed not only by our student coordinator, but also a group of dogs. These dogs had taken up permanent residency on the campus, appearing surprisingly well treated, fed and sheltered. Perhaps my expectations about the health dangers posed by dogs had been misplaced? However, a trip the following day to downtown Colaba left me reconsidering.
Amongst the crowds and chaos that defines the Colaba district, starving dogs filled the streets, crossing the commotion of Indian roads to find something to seat amongst the street rubbish. It became evident that there is a direct correlation between open garbage and the stray dog population, as they rely on this rubbish for limited food supplies and survival.
This correlation was further demonstrated in my travels through the southern state of Kerala. Kerala is renowned for its progressive social development, despite having a low per capita income and nearly stagnant economic growth. This human development approach has led to Kerala having the highest life expectancy, sex ratio and Human Development Index amongst all Indian states. Not surprisingly, these statistics are reflected in the lesser number of street dogs.
However, the stray dog population still presents challenges for Kerala, meaning there are factors contributing to this issue beyond the low human development and open garbage observed in Mumbai. The dogs often attack people which leads to citizens taking the law into their own hands. In November 2016, the Supreme Court ordered the Kerala Government to find solutions to stop increased killings of stray dogs, as culling is not a humane or sustainable solution.
Kashika Arora, a pet management entrepreneur, summarises this argument with her statement ‘Stray the word itself is wrong. They are our Indian breeds, which we Indians don’t want to accept’. As the perceived low worth of stray dogs influences their population and treatment alongside direct factors of garbage and development levels, the issue requires urgent attention. Rather than treating dogs as dirty and stray, India needs to find sustainable ways to control their populations whilst transforming perceptions to view them as man’s best friend.