By Victoria Booth
Bachelor of Science, Immunobiology and Geography 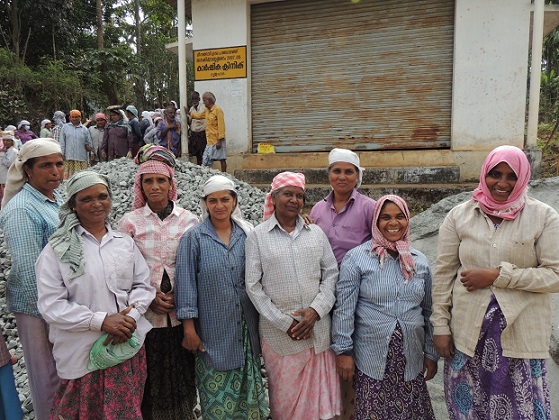 Photo: Women working as part of the NREGA Scheme within the Wayanad District of Kerala
‘Dear friends’ begins an old, crumpled notice pasted on a chipping wall of the games room of the TISS campus. The notice was concerned with the borrowing of sports equipment and concluded by extending a “warm welcome” for any students’ “suggestions and advice”. I was there to play ping-pong but my mind immediately began to whir. In its own small way, the notice was rebelling against a deeply-rooted mindset; the mindset of hierarchy. According to Shirish Patel (2010), ‘Indians have an ancient belief extending over millennia that all men are fundamentally unequal’. The sad legitimacy of this statement was continually re-enforced by our lecturers at TISS: They consistently described the caste-system hierarchy as debilitating tool of persistent oppression, with one lecturer likening this deep-rooted social ranking to a ‘virus’. Another lecturer quoted Dr Ambedkar: ‘Turn in any direction you like, caste is the monster that crosses your path’. Their examples were alarming; in some parts of India girl-children are named Nakusa, meaning ‘unwanted’ in Hindi. Suffering from the same ancient hierarchical belief, Dalits, forced into the lowest-paid jobs, have come to be the primary inhabitants of urban slums.
Interestingly, the extent of lower-caste dispossession has prompted many to convert to Buddhism in order to escape the unjust hierarchy. Movement beyond the hierarchy is taking place, with a positive momentum towards equality. In the political arena, the Constitution has taken up the role of an ‘antivirus’. Whilst it does not begin with “Dear Friends” it’s close enough:
“WE, THE PEOPLE OF INDIA, having solemnly resolved to…secure all secure all [India’s] citizens…EQUALITY of status and opportunity”.
We saw this first hand in Meenangadi Grama Panchayat, in Wayanad district.
As we traveled to a forest-rehabilitation site we came across a group of men and women building a concrete path to connect a series of houses. They were working as part of the national Rural Employment Guarantee scheme (NREGA). This is a Constitutionally-prescribed social safety-net designed to reduce inequalities. NREGA provides 100 days per year of paid work (on public projects) to any unemployed man or woman. The pay is equal- regardless of caste or gender. Social and cultural spheres appear to be making similar active steps towards reform, with the phrase ‘possibilities for a non-alienated life’ spread across the entrance of this year’s Kochi Biennale. Whilst it didn’t start with “Dear Friends”, the curators note for the Biennale beautifully articulated the same sentiment of liberation and comradeship.
Curator of this year’s Kochi Biennale, Ms Anita Dube, told us that the Biennale was intended as a ‘space where there could be no hierarchies of who could speak and what could be said and in which language’. Exhibits ranging from the embroideries of a rickshaw driver, poems written by a cotton-mill worker and the recordings of a female Sufi singer allowed visitors like us to understand and empathize with some of the most marginalized in society, via their art.
While I am almost certainly placing undue significance upon a crumpled old notice in the games room at TISS, I feel it embodies the hopeful precedent that both the university, panchayats like Meenagadi and cultural projects like the Biennale are striving for. And on that note, dear friends, as I come to the last week of my trip to India, I am convinced of the possibility that Indian citizens can experience a ‘non-alienated’ future, as the nation slowly moves beyond the hierarchy.