By Georgina Kidd, Bachelor of Education 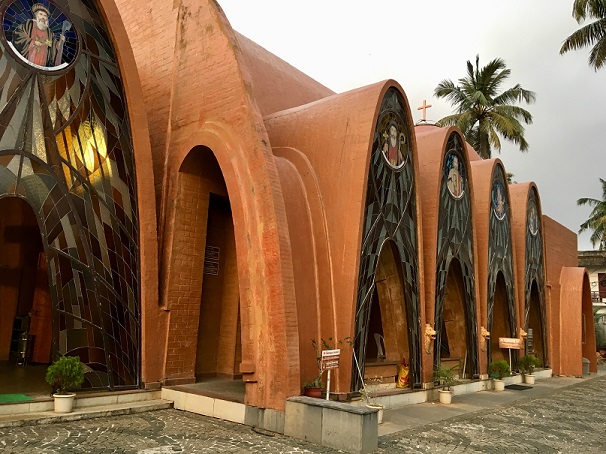 A Syrian Orthodox church in Kochi, Kerala
One thing that permeates Indian culture is spirituality. As I took the photo above, the prayers from this Syrian Orthodox church spilled out into the street and mixed with the Muslim calls to prayer and nearby Catholic masses. The multi-faith prayers echoed in bustling streets full of kids (human and goat) playing in the Sunday sunset.
While such a peaceful scene suggests the benign co-existence of diverse religious communities, religion also plays a political role in this nation of contradictions. At present, the political trend towards more oppressive and extreme Hinduism has seen division and violence in the country. This has a particularly negative impact on Muslim and Christian communities.
The southern state of Kerala has a mysterious religious history, one which has contributed to its unconventional story of development. European Catholicism first had contact with Kerala in 1498 when Portuguese sailor Vasco da Gama landed in Kochi with two Catholic priests on-board. But Keralan Christianity predates such contact and communities were found to be already worshipping Jesus, in the Syrian Orthodox Christian tradition. The Keralan church believes that Jesus’ disciple, Saint Thomas, founded 7 churches in the state in AD 52. This state, which calls itself ‘God’s own country,’ therefore has a far-reaching Christian history, which has influenced its present unique state of development. 19th Century Protestant missionaries brought education to people of all castes, both male and female, a move which was revolutionary in the highly stratified society of India. This has contributed to Kerala’s comparatively high literacy and gender equality status, with the highest Human Development Index and life expectancy of any Indian state.
The state’s religious culture is surely connected to its geography. Located on the west coast of the Indian subcontinent, Arabian spice traders have forged a centuries-long connection with the Middle East – the region of the birthplace of Christianity and Islam. The often-volatile coastal environment and richly biodiverse mountain rainforests take the brunt of the annual monsoon. Communities of deeply spiritual people whose livelihoods depend on the whims of the climate have turned to the gods – both Hindu gods or goddesses, the God of Abraham in the case of Judaism, Christianity or Islam, or the modern ‘god’ of sustainable development. For generations, people have devoted their lives unquestioningly to such higher powers with a loyalty that is to be admired.
Last year, devastating floods destroyed the homes and livelihoods of the vulnerable fishing communities lining the coast of Kerala, leaving thousands stranded on the second floor of buildings, unable to be retrieved by the few helicopters flown in to assist the rescue effort. Local fishermen mobilised using their fishing boats to rescue thousands of stranded people, plucking them from the floodwaters and bringing them to safety. Hearing these stories, I was reminded of a story from the life of Jesus. Jesus calls two disciples to leave their livelihoods of fishing and follow him. In doing so, they would become “fishers of men.”
For people living in relative comfort such as ourselves, it can be hard to conceive of the kind of faith that would shape lives and communities in such a way as it does in Kerala. In comfortable Australia, faith is often an ‘optional extra’. Perhaps we have something to learn from people with a greater understanding of how little control humans have over their environment and lives.