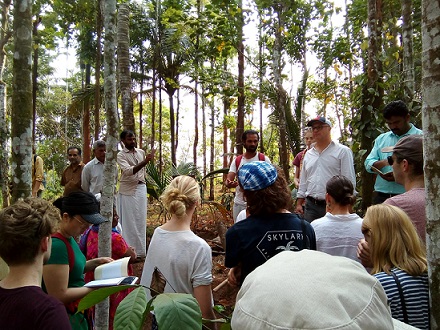 Having now spent two weeks studying and observing the complexity of Indian social and economic life it is safe to say that my appreciation for Australia’s industrial relations system has been renewed. Whereas “work” in Australia is founded upon principles of fairness and our livelihoods are safeguarded by legal instruments, the reality for the majority of Indian workers is strikingly different.
Only around 8% of India’s workforce are employed within the formal sector and have employment contracts that provide some social security and protection. The other 92% are engaged in the informal economy, vulnerable to externalities and often self-employed like the street-vendors we met in Mumbai. Throughout the Field School we have developed our understanding of the diverse challenges facing urban and rural workers and have, on many occasions, observed working conditions unfathomable in Australia. In Mumbai we witnessed labourers often working without safety equipment and, unlike Australia, if they were injured there would be no worker’s compensation to assist them. Similarly, in a seminar on informal employment, the vulnerability of domestic help workers struck me as there are no award wages or leave entitlements providing a ‘safety net’ for these workers and their families.
Whilst these examples provide a glimpse into the harsh reality of India’s unregulated employment relationships, our field school has also investigated how employment trends and policies are impacting India. Liberalisation policies to ‘open up’ India to the global economy have succeeded in promoting growth in the service sector, however they have also indirectly perpetuated inequalities. After observing this injustice of exorbitant wealth alongside destitute poverty, I am hopeful but perplexed as to how India can deliver improvements in employment conditions for its citizens. This challenge has also been complicated as Rural-Urban migration and increased educational attainment have heightened competition for decent work in India’s cities. Consequently, as the formal sector has not been able to create enough jobs for the 20 million Indians that reach working age each year, surplus labour is absorbed into the informal economy – where there is little to no state support to regulate their employment conditions.
By contrast, an example of successful employment policy that we have been lucky enough to witness first-hand is the MGNREGA (Mahatma Gandhi National Rural Employment Guarantee Act). This scheme, which any rural person may apply for, guarantees (within 14 days) one hundred days work on public works projects. In this program, women and men are paid equally and this provides a valuable source of income to over 111 million rural workers. We spoke with a group of these workers constructing a pathway in Wayanad district, Kerala. This initiative is an investment that is effectively promoting more inclusive development and is ultimately providing a India’s rural communities a ‘fairer go’ at improving their livelihoods.