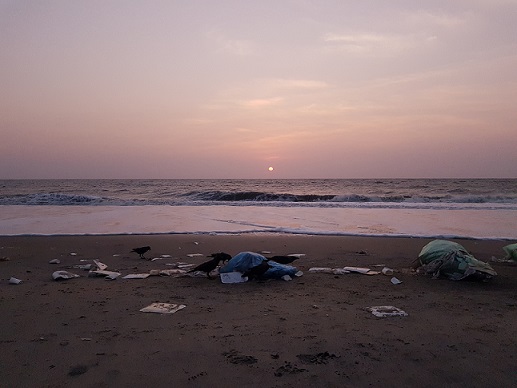 India is a country barrelling towards the future. It sounds like a commercial for an investment fund, but throughout the course of our travels in India we have never been far from some indicator of immense and rapid change. In Mumbai, cut-and-cover trenches divide arterial roads for installation of a modern metro system. Looking at the newspapers, special liftouts on proposals for ‘industrial corridors’ and loan waivers offered by the government as ‘heartfelt thanks’ to farmers are routine. The physical attributes of economic development are seen everywhere in India.
But this process comes into conflict with a complex contextual history. The traditions, social values and beliefs of the people of India are being overlayed with all the new jobs, forms of wealth and poverty of the new economy. The result is a world where old and new exist side-by-side. A case-in-point, was our visit to two fishing communities on the coast near Kozhikode. Our first stop was the busy and modern Puthiyappa Harbour, where local fishing crews described their way of living. An exploitative relationship was clear: they only rent their boats and sell their fish directly to commission agents, keeping less than a half of the value of their catch for themselves, pressing them to catch ever-larger hauls of fish. The question arises: have their attempts to integrate into the global market been beneficial? The harbour supports 1,500 families through jobs, but the lion’s share of the profits go to a wealthy boat-owner who does not share the same experiences or even live in the same village. There are amazing technical feats at work here: A haul of fish delivered in harbour at 6am in the morning can be sold in Abu Dhabi by 4 pm the same day. Yet the fishermen themselves are confined by this same globalised market – receiving only a small portion of the benefits. It’s a vicious cycle where their source of income becomes ever-more precarious.
Just down the road from the harbour, fishermen repair their nets by hand. This is a community which rejects the use of modern fishing techniques, instead relying on their traditional skills to locate the correct fish without destroying natural habitats. Rather than rent their boats, 20 to 40 families come together to purchase each boat for their shared benefit. Yet even the locals are having to deal with the developing world; overfishing has led them to travel further into the ocean, and their beachfront is littered with plastic rubbish. They say that they no longer need to catch as many high quality fish, because they are becoming so rare they bring a higher price at the market. They described this as simple “supply and demand economics”, but I have to question how pleased anyone can be with the prospect of a dwindling traditional food supply.
As India faces a national election this April/May, the Modi government promises greater liberalisation of the Indian economy, believing this to be the path to development. Yet with my experience seeing the vast inequalities in India, and hearing from the fishermen themselves the extent to which exploitation dictates their market position, I have my doubts about India’s trajectory.