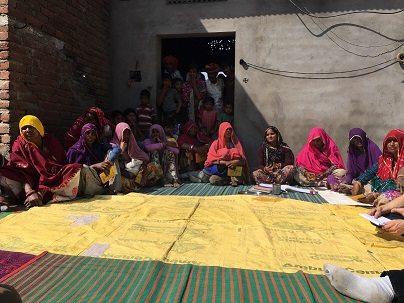 “I’m not sure how you want to phrase this, but can you ask whether men feel threatened at all?”.
I can tell from Dr Chetan Choithani’s widening eyes that the challenge of asking something like this to the group of around a dozen women, with some men and children lurking in the doorway, is going to require more than a linguistic translation.
We’re sitting with one of the eight women’s self-help groups in Kanwarpura, a village of around 1,000 inhabitants. Our guide here is a representative of SRIJAN, the NGO that helped set this group up seven years ago, and continues to support it.
“I might… take another one whilst I figure out how to word that” says Chetan, before moving on to a question about SHG structure. Fair enough.
I am, however, curious. We have spent the first half of this field school hearing about the manifestations of a deeply patriarchal society, and yet here, in rural Rajasthan of all places, is a group of women who talk like they’ve never heard anyone tell them not to. It’s a total misnomer that women’s empowerment leads to the opposite for men (a message that the global North needs to learn as much as anyone), but I can’t help but think that this is all too amazing to be true.
Because it is truly amazing. This SHG of ten women has built up a savings stock of 60,000 rupees (around AUD$1,200), which they lend to one another to purchase livestock, repay outstanding loans, cover medical expenses, and build infrastructure like wells. The Agriculture and Development School, run by this and three other SHGs, claims responsibility for doubling crop yields in four years through training and soil testing. The local government school is now preferred to private alternatives because pressure from the Village Development Committee, a council of 16 women representing all the village SHGs, have made teachers attend their classes. Kanwarpura has 24/7 electricity, reliable clean drinking water, toilets in every inhabited house, relatively reliable government services, and a corruption trial against an official that clearly underestimated what he was up against.
I am aware that as a group of foreigners, the goal is to impress us, and that the SRIJON lens is necessarily limited. For example, we walked through a neighbourhood belonging to a group from a ‘scheduled tribe’ but didn’t speak to any of its inhabitants, nor to any woman excluded from the SHGs, or any officials. Nor, for that matter, to any men.
“Men don’t feel threatened,” comes the eventual translation, with a very logical explanation. “They encourage these women. It’s a good source of income and credit when the family needs live stock or something like that. Once they saw that the SHG worked, there’s a lot more respect”. The women nod along.
Even taking all of the successes mentioned above with a pinch of salt, it’s clear these women are respected, by men, none of whom tried to speak for them, both public and private banks, who have lent the Manrag SHG four times their savings stock, but most evidently by themselves. These women probably would have had less food and more work than their brothers, little education, and would have had to relocate to an entirely new village during their arranged marriages to become the lowest with the hierarchy in their new families, almost all of which would be in the lower social and economic echelons within their village. Yet these women sat in front of us with studiously kept account books, interrupting one another in their excitement to discuss financial, social, and agricultural strategies.
This model for development is not perfect, and hardly a drop in the ocean of India’s 863 million-strong rural population, but it does one thing brilliantly: it recognises the amazing resource that already exists in all communities. It’s well documented that women are the key to successful grass roots development, and with supportive institutional structures, room to grow, and just a little self-belief, these women seem to have grown like oaks.