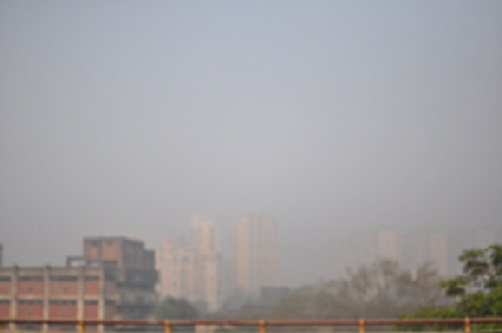 India has a population of 1.32 billion people. Homelessness, gender-based violence and malnutrition are part of the national story often not told. In the midst of such a large population many are forgotten, left to fade as if they had never existed.
In Mumbai it is a rarity for the smog to clear enough for you to see more than one layer of the city. Our gaze is always obstructed. As we begin to study the city, its institutions, and its history, it becomes apparent that this is a nation of invisible people, a nation of people we chose not to think about, chose to ignore.
As a western woman arriving in the Indian context I initially viewed invisibility as a problem. Visibility and recognition is necessary for social change. In India, however this must be rethought. Our guide in Dharavi moved to Mumbai because he wanted to disappear. Involved in a love marriage invisibility meant he and his wife could avoid being targeted by the police, dragged in for questioning, and, in more extreme cases of these love marriages, killed.
In Rajasthan as well I was faced with this invisibility-by-choice. Many women chose to cover their faces when in public. For a western woman such a practice is often interpreted as oppressive. In India, where violence against woman is prevalent, it is a more understandable choice. If you are a woman, too much negative attention from the opposite sex, or those in power, can have devastating consequences. Invisibility, in this context, provides a kind of independence, where no one knows who you are and your actions in public are less likely to lead to attract unwanted attention. Invisibility provides women protection, but it is also enforced by an oppressive system.
For many, however, invisibility is not a choice. Slum dwellers are ignored and relocated in never ending attempts to erase them from the landscape of the city. For those living below the poverty line, or on the streets, a unique identity number is crucial. Without formal documentation people are not able to access health services, social services, or rations. In Australia our passports, official papers and tax file numbers allow us to be seen in a thousand ways we never think about, but in India it is often those who need this visibility the most who don’t’ have it.
More concerning than those we are forced to ignore are those we choose to not to see. As a young child knocks on the window of our bus, attempting to sell us some form of plastic goods, we avert our eyes, finding it easier to ignore than deny. As a woman begs us for food we turn away. The truth is with so much poverty we cannot bare to see it all. To function we learn not to see.
One solution to the risk of individuals fading completely into to smog is to form groups. A collective that votes together is more likely to create change than an individual. However, sometimes, these groups become a vehicle for political exploitation. When you have a leader telling you how to vote your voice begins to disappear along with your identity. You are no longer an individual, but a member of a community – a Muslim, a Buddhist, a women, or BPL (living below the poverty line). You become a number in a voting bank. Or worse, you are ignored altogether. You are invisible because you remain only one in 1.3 billion, conceivable only as a statistic.