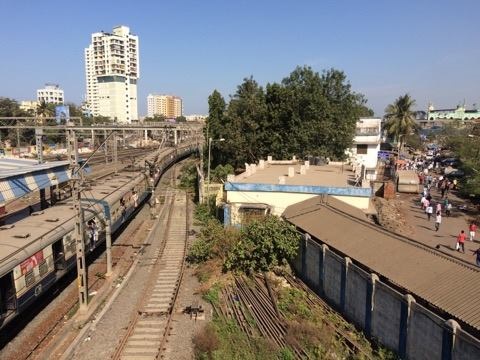 One of the most striking features about Mumbai for an Australian visitor is the amount of people. With an estimated population of 22.5 million and growing, Mumbai is currently the most populous city in India. To put that into perspective, it is nearly equivalent to the entire population of Australia! An integral part of any major city such as Mumbai is the transport. Throughout our study tour of India so far we have experienced various modes of transport including buses, taxis, rickshaws and the train. Catching transport can be a mundane activity, but it reveals a lot of interesting things about a place.
Just when I thought I had left the train woes of Sydney behind, I was confronted by more chaos but on a whole new scale when I arrived at a suburban railway station in Mumbai. It was peak hour and there were streams of people walking, shouting and shoving in all different directions. As the trains pulled up to the station they were packed with people hanging out the open door carriages. There were even people jumping off the train and trying to board before it had come to a stop. It was not hard to see why the rail network of Mumbai is known as the lifeline of the city.
Every day over seven million people in Mumbai travel on the train and for many it is a necessary way to reach their place of employment. However, as we have been made aware through our lectures and course readings, it can often be a safety issue for women. Seeing train carriages reserved for women only, a relatively new initiative in Mumbai, really re-enforces this. Any change that enables women to access employment is a welcome change in my opinion, but at the same time, it may be a band aid solution to a much larger societal problem.
Despite having train carriages dedicated specifically to women, there appeared to be far more men than women waiting to board the train. This observation is perhaps not surprising given that in a lecture on employment we learnt that there were less women employed in urban areas than men. It also reflects our knowledge of the high number of women not in the labour force, which includes those engaged in unpaid housework and care duties.
The train was not only a method of getting to work, but for others it was an important means of employment. Inside the train there were people making their way through the carriages selling small goods. Outside the train, there were people collecting rubbish distributed across the tracks. As I learnt from a local, these people are known as rag pickers. Their survival depends on selling the plastic for just 4 rupees a kilogram to the local recycling industry. Both the sellers on the train and rag pickers on the train tracks are considered to be part of the informal economy, which as I recently learnt on this field study, comprises a massive ninety-four percent of India’s labour force.
Although a fairly short train ride, upon reflection, it speaks to the themes we have been learning about over the past week such as urban growth and development, women’s issues and employment.