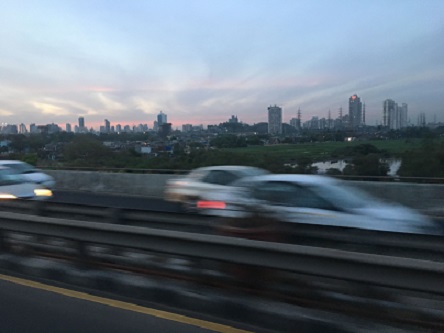 Only 31 per cent of India’s population lives in an urban area. But this amounts to 400 million people. 23 million people live in Mumbai alone. With this exorbitant number of people, I wonder, how can technology be used effectively to improve the sustainability of a city, particularly a city like Mumbai?
In recent times, new cities in India have been built to replicate those in rich countries and incorporate technology. These are called ‘smart cities’. A smart city is generally described as optimising the use of Information and Communication Technology to monitor and maximise efficiency and increase the safety of all aspects of urban infrastructure whether that is schools, transport systems, shopping centres or waste management systems. The aim is to minimise resource consumption and costs in an attempt to make the city more eco-friendly and sustainable. In theory, this sounds like a great idea, right?
The problem with this model, as we learned from one of our Professors at Tata Institute of Social Sciences (TISS), is that rather than trying to improve an already existing city, private developers and consulting companies have started creating new cities on ‘uninhabited’ land. With this, comes environmental degradation, political corruption, further social exclusion and a whole realm of other issues. I can see similarities between this approach and the dominant consumer lifestyle in which it is now easier to buy a new product rather than fix an old one. This same approach is taken to the evolution of India’s ‘smart cities’. But it comes at a cost.
Lavasa is an Italian inspired, privately owned town built on the model of a smart city a few hours from Mumbai. It demonstrates many of the issues we have been learning about such as locking out the poor while creating new homes for the rich. Lavasa is an extreme example of the approach to urban planning. But perhaps there are alternatives. Rather than creating a whole new city, investment would be better focused on improving and rehabilitating local development plans within already existing cities.
From an ethical perspective, I find myself wondering why was it is okay for countries in the global North to use all the resources they like while putting pressure on countries in the global South, like India, to limit their resource use.
How do you envisage the future of India’s development? Do you see more ‘smart cities’ popping up around India?