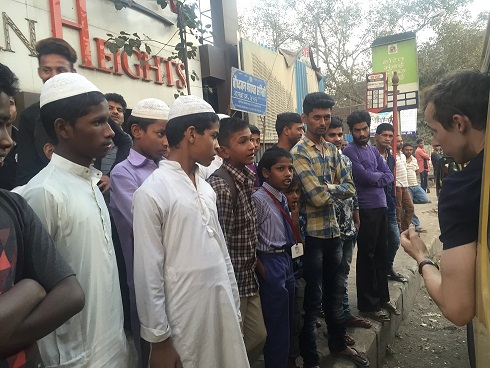 “The locals are used to it. The main benefit is for tourists who change their perceptions” claimed our tour guide, Daksh, as we walked through the winding alleys of Dharavi.
On Sunday, I went on a paid walking tour of Dharavi, along with members of our group. Dharavi is India’s biggest slum with one of the highest population density in the world. In the week leading up to the tour, and since, there has been lively debate about the ethics of slum tourism. On one hand, there was a desire to see what we had been learning about in class, while also potentially benefiting the local community by providing funds to tourist operators. On the other hand, there were concerns it could be voyeuristic, invasive, and an aestheticisation of poverty. This raised a number of questions about the appropriate role of travellers within developing countries, and where the line lies between seeing things ‘first-hand’, and being intrusive.
The tour itself was informative and engaging. We were first taken through a commercial area, surveying a number of leather, textile and pottery industries, before going to a residential area then a local school, where 80 per cent of the profits of the guided tours are sent. Apart from small children who ran up to us, our interactions with locals were passive and detached. As one of many wide-eyed tour groups going through that day, there was a feeling of indifference toward us. Daksh, our tour guide, was excellent, but I left the tour wondering: was that experience necessary to get a holistic, balanced picture of what life in Dharavi is like?
I think part of our preconceptions about informal communities is formed because of the language we use to describe them. The terms ‘slum’, ‘informal’ and ‘squatter’ are problematic and negative, defining urban life in terms of a terms of a deficit. In economics, the informal economy is that part of the economy not accounted for in national accounts. The discourse of informality is framed as the ‘other’ within the formal economics framework and formal urban planning processes. But there is no sense in which informality precedes formality. Cities are built from informal processes as much as ‘formal’ ones. In India, 93 per cent of the economy is ‘informal’ and Dharavi has an estimated annual turnover of $1 billion.
I think the popularity of slum tourism, both in India and around the world, is also linked to a trope within western culture about the ‘authentic’ traveller who visits ‘exotic’ places and ‘gets off the beaten track’. Tourists construct a humanitarian Self through their engagement with suffering in developing countries. I’ve often heard stories where tourists present their travels as essential for coveted experiential knowledge while depicting locals as the true beneficiaries of the tourists’ self-discovery. While this may not have been exactly the case for our group, as we are here on a study tour, I think these cultural narratives do affect us.
All travel involves an element of voyeurism. We enjoy seeing new places and we grow from experiences that broaden our understanding of the complexity of the world. But reflection is needed when there is power dynamics between foreigner and local, when an experience is passive and observing, rather than active and mutually engaged.
There may not be definitive answers for Dharavi, or slum tourism generally. I think this depends on a balance between the actions and intentions of tourists, the views of locals about foreigners coming into their homes, and how the tour company operates within the community that they are profiting from. But, as a foreigner, I think there is a responsibility to be cautious, reflect, and be aware of the spaces you occupy.