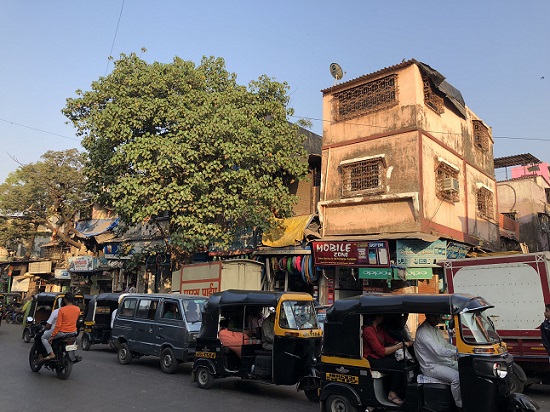 Mumbai is a city riddled with contradictions. On first arrival the modern airport terminal, complete with western food chains and modern amenities, juxtaposes uneasily with the informal settlements we pass on our way to the Tata Institute for Social Sciences. It seems a sharp contrast to have such deprivation co-exist alongside such wealth. Indeed, it appears as though two cities exist alongside each other in an uneasy relationship. The modern Mumbai, populated by vast wealth, European cars and American chain stores sits uneasily alongside the majority. This Mumbai, the Mumbai of the majority, is filled with street vendors & informal workers. The political economist within me wonders what causes such drastic inequality, and how can it be overcome?
In our first few days lessons with local academics have framed our discussions with the caveat that ‘nothing in India is simple’. The scale, complexity, and diversity of India means there can be no easy answers. Such complexity defies simplification. During our introduction to the caste system it seems as though the realities of social relations, much like any western economy, can explain the vast inequality I have seen. But social relations within India are not merely economic, as in the west, but intersect across social and religious hierarchies. The Caste system can be best described as having your position within the social hierarchy determined from birth. You enter a complex set of social relations that in turn largely determine the trajectory of your life: including employment, marriage and education. From my own western liberal zeitgeist such ideas seem alien, an anathema to my own concept of equality. This inequality manifests itself within the urban space of Mumbai which is itself not neutral, instead it actively produces and reproduces the social relations rooted within caste and embeds the pre-existing inequality through a feedback loop. Inhabiting these spaces is an eye-opening experience, walking through an informal area such as Shivaji Nagar and Chembur, the scale and pattern of inequality is clear.
The Constitution of India asserts in its preamble that equality of status and opportunity is guaranteed, however, the realities of caste and inequality seems to fly in the face of such assertions. Though the law seems to reflect egalitarian concerns it is within the social sphere where cultural norms are actively reproduced. The begs the question, how can Mumbai manage its development, addressing its inequality and ensure inclusivity? To what extent will this challenge be hindered by social norms such as Caste. How can the aspirations of modern India, an emerging global power, be reconciled with its own values. Perhaps it can only be done by ‘always looking to the future’ as a local shopkeeper put it to me. He managed to succinctly capture the essence of this clash, that only time will beget outcomes. Perhaps then it is too early for me to make firm conclusions on the true nature of inequality, after all to reduce Mumbai’s inequality into the neat reduction of caste, defies the complexity and specificity that any nuanced discussion demands. What remains certain is that Mumbai is a city in flux, the old and the new vie for space. Managing the challenge of inclusive development will be immense and the correct path may not yet be determined. Only time will tell, but with the right outlook anything is possible.