By Stan Cheung
Bachelor of Arts in Political Economy and Mathematics 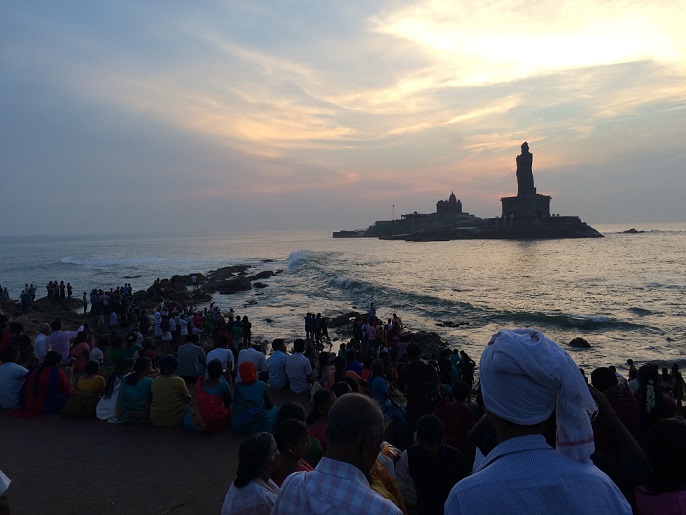 People from all walks of life awaiting the sunrise at Kanyakumari, Tamil Nadu, the southern-most tip of India
As we travel across Kerala, a coastal state in India’s south-west, it’s a funny thought that everyone we see is busy with something or other. Everyone has somewhere to go, someone to see, something to do. Taken together, we are supposed to see a society that is developing. But that becomes a far more complex story. What is development? What are the Keralites busy with?
We could try and understand Kerala’s development by looking at the data. Yet this tells us conflicting stories. On the one hand, Kerala has the highest life expectancy and literacy rates among the Indian states. On the other hand, Kerala’s average growth in income is at a rate about half the national level, and the state ranks highest for unemployment and suicides. We are left with more questions.
Visiting Kerala has revealed glimpses of the deeper story behind the figures. We found that a key part of Kerala’s approach to development is its emphasis on having the people decide for themselves what development consists of and how to go about it. We saw this in the way the Keralan state directly funds local governments, or panchayats, who have substantial autonomy over the use of these funds. In Meenangadi, a panchayat of Kerala’s north-east, funding was granted for a project to make the panchayat carbon neutral: to have no net release of carbon into the atmosphere.
For me, this was a surprise: why would a local government take it upon themselves to combat climate change? And, perhaps the bigger question: was this even possible at the local government level? We were able to pose these questions directly to the panchayat president.
The president informed us that the community actively participates in envisioning their own futures and that they recognised that any future that doesn’t address climate change is no future at all. The community were not blind to potential challenges. It was acknowledged that the panchayat has limited land ownership and was only funded the equivalent of 2 million Australian dollars. With a strategy to plant additional trees, limited land posed a problem. But it was clear to me that these were challenges the community is willing to face.
The question then becomes whether the broader economic, political and social context allows communities to face such challenges? I am reminded that Kerala’s development stands in contrast to the rest of India. The wider context in which Indians go about their daily lives seems less concerned about having active participants in the development process, and more concerned with finding clever development strategies that benefit passive recipients. It is a context that takes away the capability of those involved to imagine for themselves what development really means.
So, what are the Keralites busy with? I think it’s best that we ask them.