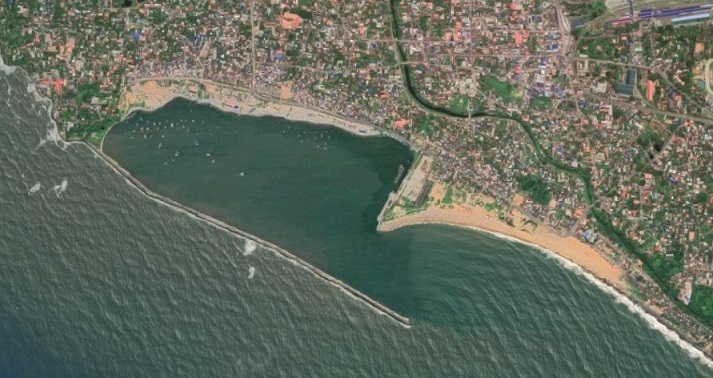 The Eravipuram seawall
The story of the India’s West Coast begins about 100 million years ago when a large rift formed between the Madagascan and Indian landmasses. India’s new coastline emerged as a 1000 meter cliff face to the Western Indian Ocean below. This cliff face still stands today, surrounded by its eroded sediments, as a mountain range known as the Western Ghats.
Today, the monsoonal rains that seasonally slam into the Western Ghats deliver over 2000mm of rain in a few short months, filling rivers and rivulets that flow into the Keralan Backwaters. These backwaters consist of 900km of interconnected canals and lakes shaped by low barrier islands that moderate the mixing of fresh water with Arabian Sea. These complex estuarine environments create unique ecosystems of brackish water, a hotspot for biodiversity and a source of livelihoods for many Indians living along its banks.
Following sediment flows from the Western Ghats into the Arabian Sea provides insights into the complexities of coastal livelihoods while acting as a method for explaining the dynamisms coastal environments. Today, the morphology of the backwaters and the Keralan coastline is changing more rapidly. Anthropogenic influences have seen greater coastal erosion, increasing the backwater sensitivity to salt intrusion, coastal flooding and altered habitat characteristics of the fishing grounds. The reorganisation of these spaces can have devastating consequences on the communities that rely on the ecosystems for their livelihoods and cultural identities.
Developments on the low barrier islands of the backwater ocean interface leads to salt intrusion. To limit the harmful effects of salt intrusion on rice crops south of Kochin, the Keralan government constructed the Thanneermukkom Barrage, dividing the Vembanad Lake in southern Kerala. The barrage was successful in minimising some of the negative impacts of salt intrusion. However, the Ashoka Trust for Research for Ecology and Environment (ATREE), an NGO, has attributed the barrage to reducing sediment flow out of the backwaters and into the Keralan coast. This reduces the overall sediment budget of Keralan beaches and leads to increases in coastal erosion.
The most immediate response to increased coastal erosion is to construct seawalls and groins. Attempts like these to influence coastal morphology often lead to unintended results down stream. Sea wall construction to minimise coastal erosion of one area, for example the Eravipuram seawall pictured above, has directly lead to 500-800m of beach vanishing south of the seawall. Technological interventions such as these require a large amount of capital to construct. The power to do so often falls into the hands of the state, being influenced by aquaculture and tourism lobby groups. The local fishing communities, who had docked their family-owned boats on now non-existent beach, were not consulted.
This story, like many attempts to understand any aspect of Indian livelihoods is far more complex than can be outlined in a brief blog post. Yet, following these sediment flows across the Indian West Coast today demonstrates an approach to understand the dynamism of Kerala’s coastal environments and wetlands. Coastal erosion and sediment transport are a complex processes modified by myriad of climatic, hydrodynamic and anthropogenic processes. Uncertainty exists around how and where technological influences need to be made. Consultation with communities that depend on the morphology and ecology of these spaces for their livelihoods is a good place to begin.