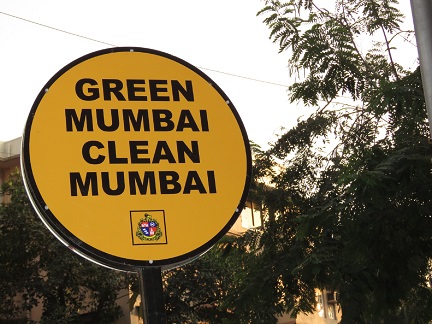 Having been in Mumbai over a week now I remain deeply concerned about where this megacity will draw the line when it comes to traffic congestion and air pollution. In the middle of Colaba, walking through a traffic jam, I came across the sign (pictured above) and found myself wondering if there were any serious measures that were being taken to keep Mumbai’s air clean. To me, the cleanest thing in that street, placed ironically in the middle of a busy city intersection, was the sign itself!
With over 20 million inhabitants, Mumbai has a population density of 31,700 people per square kilometre and as of now, the average air quality index for Mumbai sits at 154 which is just over the 150 threshold which deems it, quite simply, unhealthy for everyone. However, the most alarming thing to me is that with 52% living in large conglomerations of informal settlements, and cars belonging predominantly to the middle class, this pollution is being created by only a subsection of society.
Now let’s consider the possibility that India solves several impending crises through providing enough jobs to accommodate the highest youth population in the world; grant land tenure to all informal settlements; successfully implement their inclusive growth scheme to improve income; cure chronic poverty; and, facilitate equal rights for women in access to jobs and opportunities outside the home. One must at some stage, confront the question of how this development will affect traffic congestion and air pollution? Current estimates put deaths per year as a result of air pollution in India at over 1.6 million. How will Mumbai cope if social equality, and particularly car ownership, is suddenly secured for the majority of the city’s inhabitants?
Improving the current issues that Mumbai faces, without further impacting dangerously poor levels of air quality and traffic congestion is the challenge. Solutions might include: encouraging a mass return to more archaic forms of transport such as walking and cycling, and expanding the public transport infrastructure. From my experience in Mumbai, it seems critical that there needs to be a shift away from a culture of private care use. I say this as the congestion that I have so far seen moves little faster than walking pace, if it moves at all. Meanwhile tonnes of nitrogen dioxide are ejected into the atmosphere and ultimately our lungs. I can only hope that measures are being taken by the local government, following the examples of Milan, Dublin, Stockholm, Belgian, and Copenhagen, to create cleaner, more enjoyable and more people friendly cities for all.