By Annie Nolan
Bachelor of Arts, majoring in geography and government & international relations 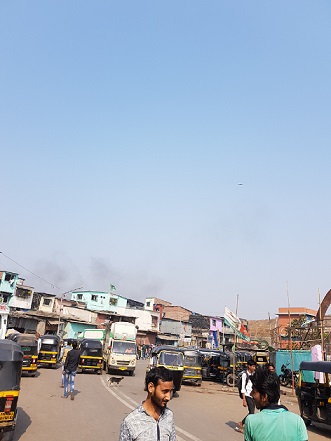 The edge of the Deonar dumping ground, Asia’s largest rubbish tip, is lined with informal settlements, fruit vendors and rickshaws. Standing on this street, as on many others in Mumbai, I am struck by the lack of women. As we have explored Mumbai in our free time, I have repeatedly marvelled at how few women there are in some public spaces. But our time in class has helped offer an explanation.
In sessions with TISS academics and class discussions we have been learning about the social structures which inform the Indian context and shape the nation’s pathway towards development. For example, the caste system which has shocked, infuriated and fascinated us all. We have also discussed the role of gender at length – including social attitudes towards women and the profound effect these have on development.
Gender inequality in India is pervasive and it affects women in various ways throughout their lives. Discrimination begins in gestation, as natality inequality is a growing problem with a female to male ratio at birth of 900 females per 1000 males in 2015. This is the result of sex specific abortions and parental preference for boys. Gender inequality also impacts on women’s access to education which is reflected in the nations literacy rates as 64% of females are literate compared to 80% of men. In addition, gendered discrimination increases vulnerability to violence in both the public and private sphere. Such inequality has a far-reaching negative effect on society as a whole.
My initial observation that there are few women in some public spaces now seems an obvious product of social attitudes towards women and the subsequent restrictions placed on women’s mobility. Yet, despite the many challenges Indian women face I have also seen reason to be hopeful for the future. Personally, I have noticed that by contrast to certain public spaces young women move freely on TISS campus and occupy half the student population. Whilst visiting the Mumbai headquarters of the voluntary development organisation Youth for Utility and Voluntary Action (YUVA) I was encouraged by their programs to support and empower women and children. Through the media I have watched on as in the state of Kerala two women; Bindu Ammini, and Kanakadurga, entered the Sabarimala temple which women have historically been banned from entering. In doing so they defied entrenched social values and sparked the formation of a 620km human chain in support of gender equality.
Despite my optimistic outlook, it is impossible to know whether India will rise to meet the significant challenge it faces in achieving gender equality. What is clear, is that it is extremely important for the whole of society that gender equality improves.